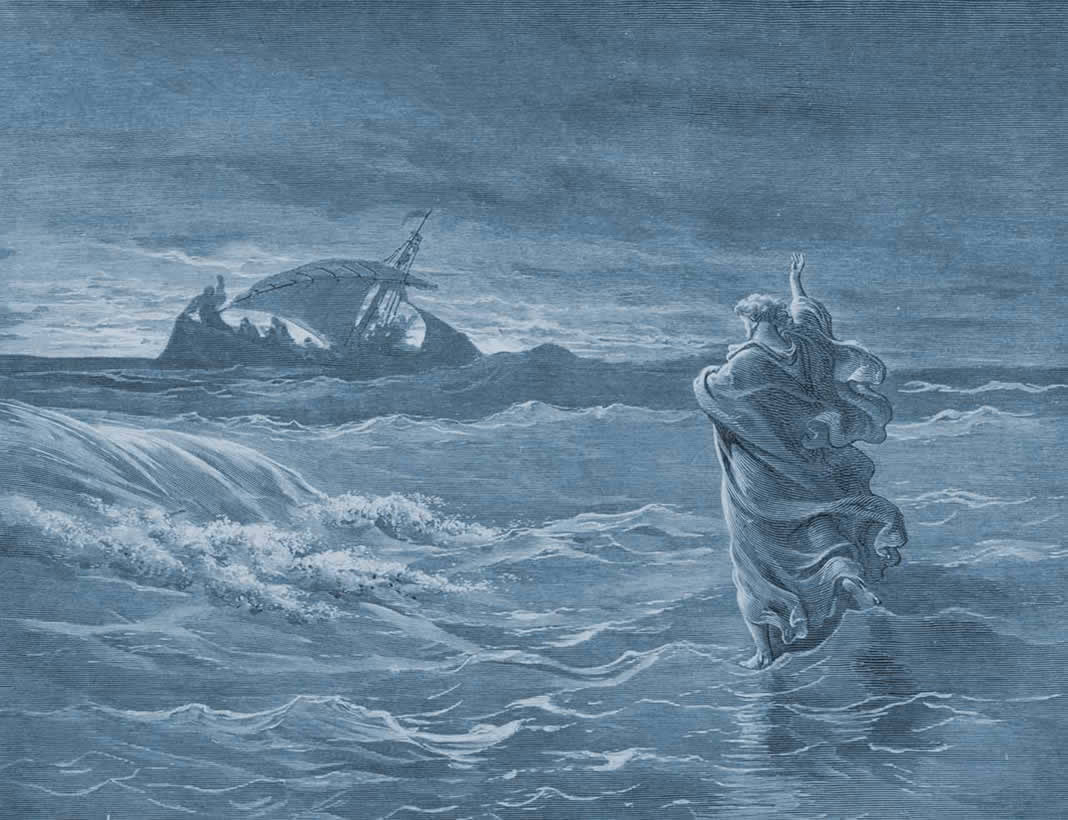 I.) Christianity on Hard-to-see “Thin Ice”

We find ourselves again faced with the miraculous works of Jesus. Emmanuel, God with us, Who came not only with divine claims, but the works to prove it. You may recall during our study of Christ feeding the thousands that people go to great lengths to disprove His omnipotent work. It therefore should not surprise us to see similar attempts with this specific work.

Several of the foolish claims are that:

1,) Jesus was only walking on rocks under the surface of the water.

2.) Jesus was actually on land, and the eyewitnesses were closer to the shore than they had thought.

3.) Jesus walked on hard-to-see ice that “Rare conditions…conspired to create.”[1]

A look through Matthew, Mark and John will easily reveal the ridiculousness of all these.

Skeptics conclude the Word of God to be illogical, unreasonable and contradictory. They, however, fail to acknowledge the path they take to come to such a conclusion contradicts both logic and reason. J.C. Ryle’s words are fitting here:

Q.) How does one seek to undermine the credibility of the Bible’s message?

A.) Attack the very thing proving it to be credible; the miraculous works wrought by God and witnessed by commoners. If one can strip Christ of His works, they will inevitably strip the truth from His Words. His works validate His words.

It is interesting to note that skeptics of this account devote so much time attempting to explain away Jesus walking on the water. They either fail to see, or purposefully avoid the other miracles recorded in this account, for Jesus not only walked on water:

2.) The boat was immediately at the intended destination.[4]

Q.) What is the purpose of this text?

A.) It is to reinforce the truth of the previous text, because the disciples “had not gained any insight from the loaves.”

To convey their lack of understanding Mark uses the word  Suniemi.[5] Meaning the disciples could not put the perception with the thing perceived. They did not connect the dots of Christ as the Creator during His continuous creation of food.

Q.) Why were Jesus’ disciples incapable of putting the truth together?

A.) “Their heart was hardened.”

It was Poroo.[6] It was covered in thick skin. It was calloused over. It was dull of hearing. Jesus is therefore going to: Circumcise the foreskin of the heart. Soften that which is calloused over. Sharpen what has become dull.

A1.) He will walk out to their boat on top of a wave battered sea.

A2.) He will get in the boat and calm the wind to settle that wave battered sea.

A3.) He will instantly deliver the boat to its destination, which the disciples were unable to get to because of the waves. That which hindered them, Jesus walked on and silenced.

Q.) How did Jesus walk on water?

A.) He is Creator God! He is I AM, the Self-existent One.

“If you do not believe in the unique deity of the Lord Jesus Christ, you are not a Christian, whatever else you may be. We are not looking at a good Man only, we are not interested merely in the greatest Teacher the world has ever seen; we are face to face with the fact that God, the Eternal Son, has been in this world, and that He took upon Him human nature and dwelt among us, a Man amongst men – God-man. We are face to face with the mystery and the marvel of the Incarnation and of the Virgin Birth. It is all here, and it shines out in all the fullness of its amazing glory. ‘What manner of Man is this?’ He is more than Man. That is the answer – He is also God.”[7]

Do not doubt Who He truly is for this text demonstrates His everlasting identity.

As has already been noted this portion is connected with the miracle of the loaves. Jesus has just fed 15-20 thousand people with five loaves and two fish. John’s gospel tells us “the people saw the sign which He had performed” and concluded Jesus was the prophet Moses spoke about.[8] Since the people misunderstood the work of the Messiah they “intended to come and take Him by force, to make Him King.”[9]

Mark reveals what Jesus does:

This trip should take 1-2 hours.

After Jesus makes His disciples leave He takes care of the people and goes up to the mountain to pray.

Some have suggested the crowds desire to make Jesus King produced a similar temptation to that of Satan’s in the wilderness. Jesus is again presented with the opportunity to “bypass the cross and claim an earthly throne immediately.”[10] This is not The Father’s will.[11] Jesus maintains His dependency upon The Father and prays to Him.

Mark is now going to provide us a time frame by which we can measure the disciples boating trip across the sea. This is important because it will highlight their inability and elevate Christ’s divinity.

There seems to be a hint of divine omniscience here because based on time and location Jesus should not see them, yet:

Mark then tells us what time Jesus goes:

He went to them at the fourth watch, which meant it was 3-6am. It took 6-12 hours to go part way in a trip that could have been completed in 1-2 hours.

It should be understood that Jesus “intended to pass by them” in the sense of coming alongside. He had every intention of being noticed.

A.) “They had not gained any insight from the incident of the loaves.”

Their dull, calloused hearts did not perceive The Creator Clothed in flesh working among them. He desired His identity to be evident among His disciples, so the Creator of water walks out to them upon it.

Now there was popular superstition during this time that ghosts would roam the sea and whoever saw one was met with disaster. This explains the dread that consumes them as they see Christ coming:

Jesus immediately seeks to discourage their fear by encouraging them in Himself. Our translations do not do this statement any justice at all, which should be rendered:

This declaration would get the attention of all His Jewish disciples on that boat.

I AM is the One true God Who:

2.) Delivered Israel from the Egyptians through the parting of the Red Sea.[15]

3.) Fed Israel for forty years in the wilderness with manna, the bread from heaven.[16]

Jesus Christ now stands before them declaring to be I AM after having just:

1.) Fed thousands of people with five loaves of bread.

2.) Walked to them upon a wave battered sea.

As soon as Jesus entered the boat:

1.) The wind and waves ceased from raging.

2.) The disciples were at their destination.

Mark records “they were greatly astonished”, which meant beside themselves. It conveys someone being mentally thrown out of place, or displaced in their thinking.

Matthew tells us their conclusion “those who were in the boat worshiped Him, saying ‘You are certainly God’s Son!’”[17]

IV.) The Significance of Christ’s Deity

Q.) Why is it so important we understand that Jesus is God the Son?

Simply put, only the blood of the God-man is able to atone for man’s sin. If Jesus were not God His vicarious death on the cross could do absolutely nothing for us. In order for us to be made right with God our sins need to be atoned for, but the blood of mere a man will not suffice.

Through His blood I AM obtained eternal redemption[18] Since He lives forever, He is able to save forever those who draw near to God through Him.[19]

When it comes to our eternal security in Christ take courage, because I AM has come and done that which we could not, do not fear. He is certainly God’s Son, worship Him!

[7] Spiritual Depression: Its Causes and Its Cures, Martyn Lloyd-Jones; Page 136